Following a series of public forums across the region, the Southwestern Ontario Transportation Alliance unveiled its Network Southwest public transportation action plan at lunchtime on March 18, 2015, in St. Marys.

Al Strathdee, Mayor of the Town of St. Marys, announced a contribution to the cost of researching and presenting the report, which has been funded by contributions from community advocacy groups, businesses, and municipalities across the region.

Network Southwest will require an investment of $400 million over five years – equivalent to one kilometer of new subway tunnel – to purchase modern, Ontario-built trains, make safety and capacity improvements to the railway network to allow shorter journey times, and establish a network of bus routes to reconnect the dozens of communities that have lost their bus services since 2009. The full report is available online at www.swota.ca/network-southwest. 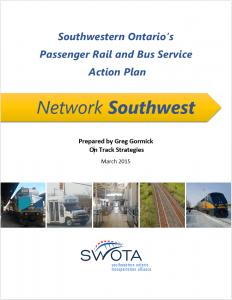 “There is nothing technologically or legislatively untested in the Network Southwest concept, which has been proven by the successful U.S. examples on which it is based. Nor is the cost onerous, especially in the context of recent Canadian transportation projects. What Network Southwest requires most is the will of both the federal and provincial governments. With the concept now in hand, the time has come to determine whether either or both levels of government are willing to investigate mobility solutions that will deliver major economic, social and environmental benefits to Southwestern Ontario at a time when such improvements are urgent,” said the report’s author, Greg Gormick.

SWOTA, a joint initiative of local advocacy groups across the region, commissioned the Network Southwest report with a mandate to address the needs of all communities in the region, stretching from Windsor, to Niagara Falls, to Owen Sound.

SWOTA President and local business leader Terence Johnson, an economics graduate from the University of Oxford, said: “Both the provincial government and VIA Rail are actively exploring major infrastructure projects that promise significant benefits ten years or more down the tracks. This is encouraging, but it doesn’t change that fact that communities that have lost all their bus services, like Wingham, or lost the key train that allowed people to commute, like St. Marys, require urgent action to prevent further economic damage. Triggering the network effect, making sure the whole system is integrated and easy to use, multiplies the impact of every dollar invested. We are delighted to have developed a practical and affordable plan to turn the tide right now.”

Public forums to present and discuss the Network Southwest vision have been held in Sarnia, St. Marys, and Stratford.

The next public forum is scheduled for April 8 at the London Public Library. SWOTA committee members are also meeting directly with MPs, MPPs, government departments, and transportation agencies.