You are here: Home / News / VIA Rail Promises More Trains for London 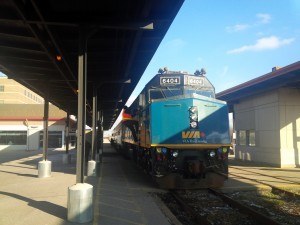 The Southwestern Ontario Transportation Alliance, meeting in London on Thursday May 7, 2015, welcomed the promise of seven daily trains between London and Toronto by January 2016.

Speaking to the London Chamber of Commerce on April 28, VIA Rail President and CEO Yves Desjardins-Siciliano outlined plans to reroute the Sarnia-Toronto service through Brantford and to add an afternoon train in each direction between London and Toronto.

“These promised additional services are a first step in the right direction, but on their own are not enough to reverse the damage done to our regional economy by past cuts to rail service and by lost intercity bus routes. We must keep up the pressure to ensure that the federal government invests in the resources VIA needs to execute this high performance strategy, and to replace 60-year-old equipment with modern, fully accessible trains.”

SWOTA’s Network Southwest public transportation action plan, presented to both provincial and federal politicians this spring, calls for seven daily trains on the London-Brantford-Toronto route, which would run through to Sarnia and Windsor as part of a package of measures that also includes connecting bus services to communities not on the rail network to restore vital public transport links between Southwestern Ontario communities.

Federal cuts to VIA Rail in 2011 led to a sharp reduction in services throughout the region, with Sarnia, St. Marys, Stratford, and Niagara Falls amongst the hardest hit.

Desjardins-Siciliano cited the need for better communication between the provincial federal governments as the main reason for the lack of good news regarding services to St. Marys and Stratford, while confirming that a multi-million dollar infrastructure investment to prepare the route for enhanced services will be completed this summer.

“For those communities to thrive, and to get the best value for the tax dollars already invested in infrastructure, we’ve got to get everyone to the table and find a way to bring those services back,” added Johnson.